Since the early 1960s, millions have people have trusted pellistor (catalytic bead) sensors to protect them from the hazards of flammable gases in their workplace.  From underground applications such as mining or tunnelling, through a wide range of water treatment, oil, gas and petrochemical works, pellistor technology has remained the most frequently deployed to warn of rising gas levels and through their incorporation in sophisticated instruments and detectors, provided alarms to ensure the correct safety measures can be taken or evacuation can be initiated.  The technology has gained ubiquity, not only from its wide range of measureable gases but also as a result of its inherent simplicity which requires simple driver electronics, but also the relatively small size of sensors and their affordable prices.  However, more recently the technology has seen stiff competition from the advent of infra-red and other optical sensors, which deliver some real advantages and has led some to sound the death knell for pellistor technology.  In this article, we discuss the historical development of the pellistor and by reviewing its future developmental roadmap, explain why there is still plenty of life left in the technology, and plenty more lives to be saved.

What is a pellistor ?

As a result of greater worker safety concern and tightening safety regulations in the British coal industry, there was considerable effort invested in the development of flammable gas technology which resulted in the invention of the “pellet resistor” or pellistor.  In simplest terms, a pellistor is a coil of finely wound wire, typically platinum, around which a mixture of ceramic material and catalyst is deposited to form a small bead (hence the common alternative name of catalytic bead sensor.)

Figure 1 – Structure of a pellistor 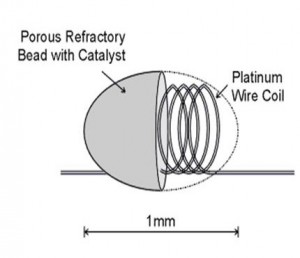 By application of an electrical current, the bead is heated to between 300-400°C and at this temperature when flammable gas is encountered it will burn on the surface of the sensor raising its temperature further.  Since the resistance of the platinum coil inside the bead is highly dependent on its temperature, the presence of gas can be measured by maintaining the sensor in an electrical bridge circuit, the output is linearly proportional to the concentration of flammable gas present.  Pellistors are typically used in pairs, one ‘detector’ bead contains the active catalyst and is designed to respond to gas, the other ‘compensator’ bead is manufactured without catalyst and only responds to changes in environmental conditions, thus providing inherent temperature compensation.

Since a pellistor is a heat source, it is also a potential ignition point for flammable gas if the concentration increases beyond the lower explosive limit (LEL), and so the beads are typically encased in a stainless steel housing with a metal sinter fitted.  The purpose of the sinter is to ensure that any flame generated around the bead is unable to propagate outside of the sensor and initiate an explosion.

Over the years, significant enhancements have been made to the technology to increase its usefulness.  One inherent disadvantage of pellistors is that the catalyst materials used in the beads are susceptible to a reduction in sensitivity when exposed to gases such as sulfides, silicones and halides.  In some cases, the reduction is reversible (inhibition), in many cases the reduction is permanent (poisoning).   The problem has been significantly reduced by the introduction of advanced filter materials inside the sensor designed to protect the sensitive catalyst from such gases and prolong their working lifetimes.  In addition, some manufacturers have adopted an alternative bead structure; historically pellistor beads have been manufactured with a hard ceramic core onto which catalyst is doped in a hard shell, but it is also possible to build the bead as a mixture of ceramic and catalyst as a slurry.  The latter approach provides a much greater availability of catalyst surface area and a direct increase in poison resistance.

A further disadvantage of pellistor technology is the relatively high power requirement used to maintain the bead at the correct temperature.  For fixed gas detection systems this is not typically problematic, however for portable battery powered devices the instrument run time is directly affected.  In response, pellistor manufacturers have sought to develop smaller beads using platinum wire as thin as 10μm, and although there is a trade-off between power and poison resistance, most portable flammable gas detectors are fitted with the newer generations of low power, portable pellistor sensors.

The adoption of pellistor technology in portable applications introduced a further challenge; since the instruments are typically clipped to the worker’s belt or lapel, they became subject to significant mechanical shock and impacts.  The beads inside the sensor are relatively fragile and extreme shock can cause damage to the internal welds resulting in sensor failure.  Pellistor manufacturers responded by including shock absorbing packing materials directly in contact with the sensor beads, thus protecting them against all but the most severe impacts.

Optical technology – the new kid on the block ?

Although optical and in particular infra-red technology had been available for many years for the measurement of flammable gas in laboratory grade equipment, it was not until the early 90’s that sensors which were of a sufficiently low price and small size became available for use in industrial safety applications.  Rather than combustion, infra-red sensors rely on the absorption of particular wavelengths of light by flammable gases such as hydrocarbons and by the use of highly sensitive pyroelectric detectors, the presence of explosive gas can be determined.  Since optical measurement is entirely non-chemical, infra-red sensors offered a significantly longer working lifetime than the then-commercially available pellistors, they worked typically at lower power and required less frequent calibration.  As a result, there has been a migration from pellistor technology to infra-red technology in gas detectors for industrial safety, although the shift has been relatively slow since  optical technology remains more expensive and requires more sophisticated driver electronics than pellistor technology.  However, as volume increases, the cost of infra-red sensors will reduce and sensors are now available with integrated driver electronics to facilitate their adoption and reduce the complexity of the required circuitry.

It is not however all bad news for catalytic bead sensors.  A fundamental essence of the technology is that it senses flammability – if the gas can burn, it will burn on a pellistor and there are some gases such as hydrogen which cannot be detected using infra-red sensors.  In addition, there are some applications where the potential hazard is not completely known and could be one of a range of different flammable gases – for these applications the relative sensitivities of pellistors make it a more appropriate sensing choice.  The higher sensitivitity of non-laser based infra-red sensors to gases such as ethane and propane may lead to false alarms.

Furthermore, the inherent construction of pellistors has benefited from a complete overhaul with the launch of SGX Sensortech’s new MPEL.  The new range of sensors are built on a micro-electromechanical  (MEMS) system which removes the need for a mounted bead design and instead uses an etched micro-silica heater platform.  The new support structure using well proved catalyst technology allows pellistors to be built in high volume at the wafer level using semiconductor manufacturing techniques providing a much greater degree of reproducibility.  In addition, the low thermal mass of the sensor provides a significant reduction in the power required and better still, offers the opportunity to drive the sensor in pulsed mode.  As an example, a typical portable pellistor might require more than 200 milliwatts to operate; the MPEL offers a 50% reduction in power when voltage is applied constantly and a 90% reduction in pulsed mode.  This potentially equates to an instrument run time extending from 12 hours to 5 days.

Since the sensor is manufactured on a solid substrate, the new pellistor is no longer susceptible to mechanical shock and offers robustness equivalent to an optical sensor.  Poison resistance has not been compromised either, as a result of careful catalyst selection and deposition combined with novel filter technology.   It is also the first sensor to be certified intrinsically safe for all Group IIC gases which extends the range of applications for which it can be used and also simplifies the certification of any instrument using it.  It is available in a range of housings and as a result of its intrinsically safe status is ideally suited for adoption in customised packages. 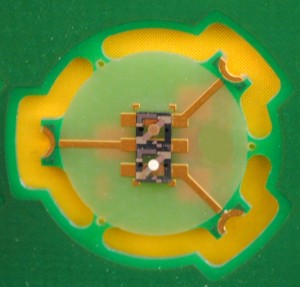 Despite the competitive threat of optical technology, we at SGX Sensortech believe the future remains bright for pellistor technology.  Whilst some flammable gas sensing applications are ideally suited to optical gas sensing, with the recent advances in technology and design, the vast majority of industrial safety applications and instruments will continue to benefit from the tried and tested, low cost, high performance gas detection provided by pellistors. 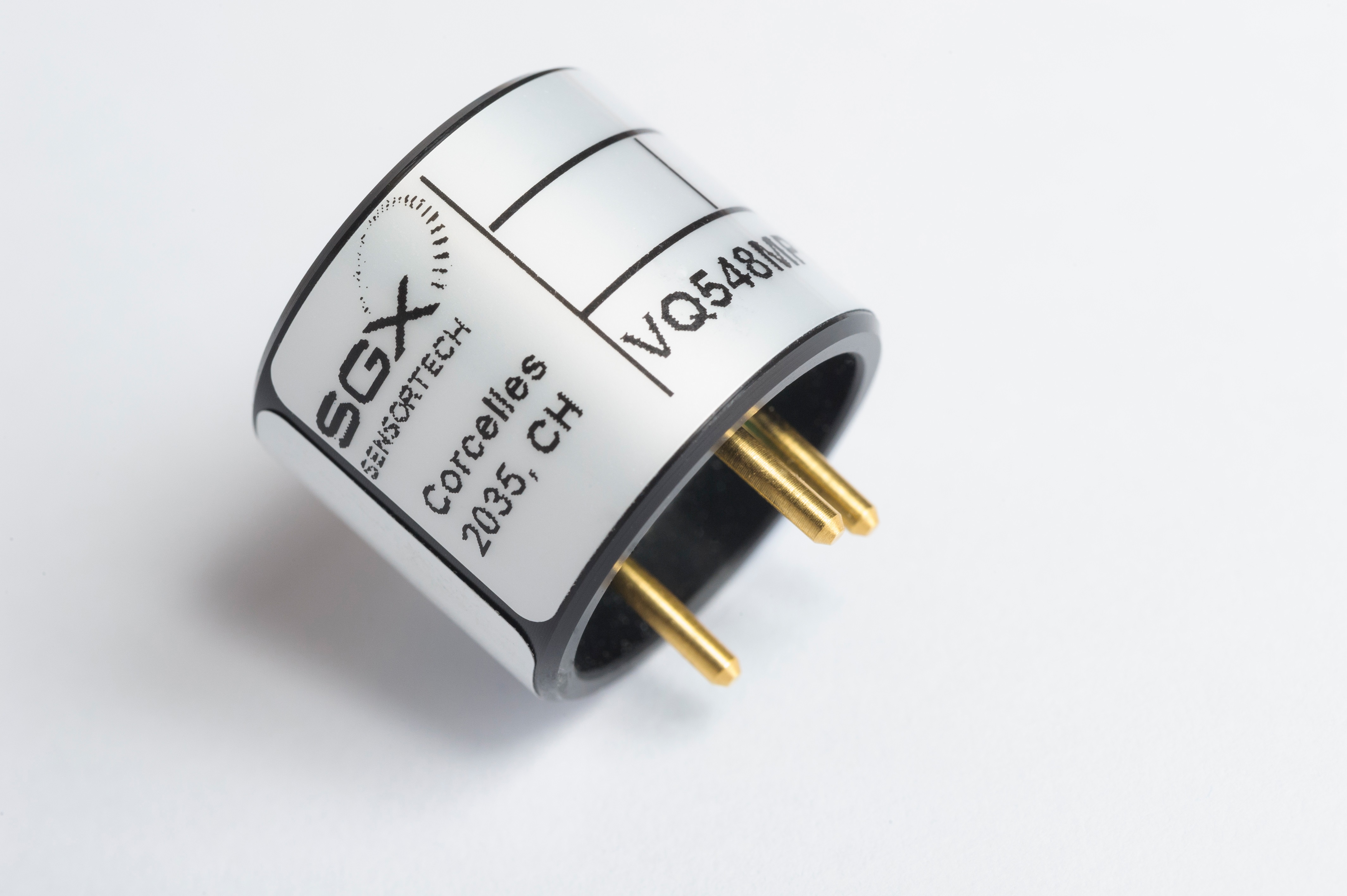